How to Choose an Optic for Your Rifles

How’s it going into daily shooter and there’s going to be a quick and condensed article on how to pick an optic for your rifle.

This is definitely one of the most asked questions that I get everyday. People basically have bought a rifle, they want to put some type of glass on it and they’re not exactly sure what direction to go in. I typically only ask two questions, those questions pretty much.

We’ll get down to the minor details that you’re looking for and those two questions are:

What’s your budget and what do you want to use it for?If you have the answer to those two questions, you know exactly what you want.

The first question was what’s your budget and that’s a really important one, because once you’ve established your budget you want to forget about all other optics outside of that budget. Because they may have features that are going to be distracting and might you lead you in different directions that aren’t really very helpful. So look at only the optics that are in the the budget that you’ve established for yourself.

What do you need the optic for

The next question that I ask people is what do you need the optic for. What’s the primary role and function of this optic once it’s mounted on your firearm, if your answer is I need something for medium to long ranges for either let’s say hunting or competition. I’m going to steer you towards a fully magnified optic, something that might be a little bit heavier that has a larger objective to it, and a higher magnification range but something that’s going to be perfect for hitting something out let’s say past five or six hundred yards. That larger objective is going to be able to give you a wider field of view so you can find your target even when you’re fully magnified and the higher magnification range is going to reach out there to those targets, that are sitting at 1000 yards maybe, and you need to get up there and do a nice precise shot with a good clear reticle.

If you say you want something that’s magnified, so you can still reach out to 100, 200 or 300 yards even accurately. But you want it for competition. then I might steer you something. That’s a little bit away from a large objective and something to a smaller objective like this twenty millimeter one point five to four point five magnified optic.

This is good for the Three Gunners, somebody who wants something light fast and maneuverable that may have to shoot targets. They’re up close and further away both are magnified but two completely different uses for different answers. And to clarify what I mean what I’m saying fully magnified optic is an object that even at its lowest variable setting is still magnified like this optic right here is a 3-9 optic, and when you bring it, all the way down to its lowest setting it’s still three times magnified.

If you’re the type of person that answers that second question and says I want something for home defense, I want something for personal defense of my life, of my property, I want something for even competition but my competition doesn’t require any long-range shooting or even just for plinking. I’m probably going to steer you in the direction of a good red dot. Depending on your budget and red dots are nice In the fact that they really do run. The entire gambit when it comes to price ranges, you can get a lot of great features even if you don’t have a really big budget. That’s definitely something that’s nice. What red dots are good for is everything from extremely close range out to medium ranges, so you could still hit something at 300 yards like I said before, but maybe not so precisely so what I like these for is anything from zero yards out to about 200 yards, that’s my sweet spot when it comes to a red dot. I can hit things fairly accurately with that. Also you have quick target acquisition, you have an illuminated reticle, so with that illuminated reticle, it’s going to help you acquire your target at night time. Maybe not so much acquire your target but it’s going to be able to help you put that reticle on your target even in low-light situations.

The different things you’re going to get are either, a very nice small precise dot which is good for precise shooting. A medium sized dot that is going to be good for targets that are primarily up close and you’ll even get dots that have let’s say 65 MOA ring reticle to them. That are just perfect for up close shooting and pretty much up close shooting only, so if you’re that type of person that really wants something for SHTF, you want to defend your life, your liberty, your property. I would probably point you in the direction again of a red dot and you can get a magnifier for a red dot, but you know what? To me, magnifiers are great again only if you’re going to be shooting out to 300 yards or even 400 yards, but you want a little bit better precision in that long range shooting? To me, they’re not the best typically, they come around 3x magnification all the way up to six times magnification, but you’re still talking about a red dot with a not so super accurate reticle. Now the optics that you see here.

I’ve had four long time other than the Nikon P-223 that’s fairly new to my collection. 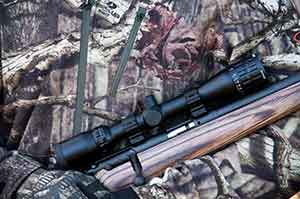